Researchers have developed a coating for paper that makes it behave like plastic – but still breaks down. The coating is a cheap and safe mixture of chemicals, which combine to make the paper rigid, waterproof and bacteria-repelling. While they’re initially planning to see how the coating works in food packaging, the researchers think their coating could eventually be applied to other materials.

“The main problem with plastic materials as I see it is their inability to degrade quickly and safely,” says Professor Zenji Hiroi, a researcher from the Institute for Solid State Physics at the University of Tokyo, Japan, and co-author of a paper describing the coating, published in Industrial & Engineering Chemistry Research. 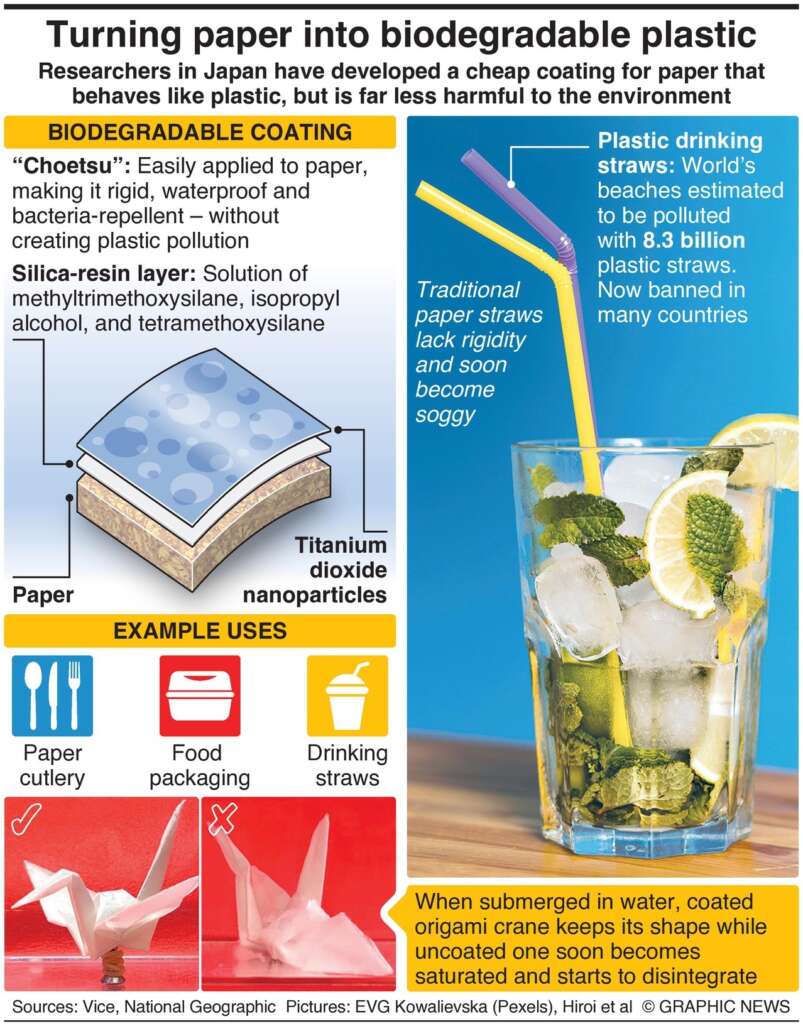 “There are materials that can degrade safely, such as paper, but obviously paper cannot fulfill the vast range of uses plastic can. However, we’ve found a way to give paper some of the nice properties of plastic, but with none of the detriments. We call it Choetsu, a low-cost biodegradable coating that adds waterproofing and strength to simple paper.”

Choetsu is a tongue-twisting mixture of methyltrimethoxysilane (a silicon- and carbon– based compound used as a drying agent), isopropanol (an alcohol often used in hand sanitiser), and tetraisopropyl titanate (a carbon- and titanium- based compound, that acts as a surface coating in paints and plastics).

When a paper structure is dipped into the mixture (or sprayed with it) and then dried at room temperature, it forms a thin layer of silica and organic (carbon–containing) molecules. This is what strengthens the paper and makes it waterproof.

It also has a thin layer of titanium dioxide nanoparticles, which assist in repelling dirt and bacteria. (Titanium dioxide is also used in some toothpaste and cosmetics.) According to the researchers, all these chemicals break down over time in the environment.

“The technical challenge is complete, and some applications could be realized soon, such as items for consuming, packaging or storing food,” says Hiroi. „We now hope to use this approach on other kinds of materials as well, and we can create a dirt- and mold-resistant coating that could form onto glass, ceramics and even other plastics to extend their usefulness.”